A Day in Dagestan

A Day in Dagestan: stopped by curiosity and hospitality

The day in Dagestan started with a knocking at the door. Knock knock knock. I looked at my phone: 10.30am. All right, fair enough, probably time to get out of bed and get cycling. But I had paid for this hotel bed and it was so big and so comfy and so not a camping mattress. Maybe I could just roll over and they would go away. Knock knock knock. Sigh.

I opened the door to reveal one of the hotel staff accompanied by two policemen. “Zdrastvutiye” they began. This was a good start in our communication, I understood that that was “hello” in Russian. The next line of questioning, however, was indecipherable for a girl who knows only about seven other words in Russian. “Ya anglichanka”, I interrupted, revealing both my nationality and an inability to understand anything they had just said. All three of them paused. “Passport”, one of policeman said. I yawned.

Yawning at the policemen

I suppose yawning was an unusual reaction under the circumstances. I didn’t mean to be rude but I had lost count of the number of times that I had been stopped by police in this region to have my passport checked and to be questioned. When I had entered Dagestan from Azerbaijan I had been stopped at the international border for two hours of questioning. At each police checkpoint dotted along the long flat dusty roads the police had stopped me. On several occasions whilst I was cycling police cars had over taken me and waved me down and even the night before an off-duty policeman had stopped me on his way home from work. The border control questioning had ranged from curiosity, to suspicion, to surprise, to wondering if I was part of the military, and finally, to welcoming me heartwarmingly to their region. The other times I was stopped? Just plain curiosity. The police were bursting with curiosity—and concern—about a solo female English tourist cycling through their region. This region has had a complex soviet history, a complex post-soviet history and still suffers interethnic, interregional and international religious and cultural tensions. I do understand the need for all of these police checks. But I’m not convinced that asking for selfies with me is part of their duty.

After having had so many encounters with policemen over the last few days, opening my hotel room door at 10.30am to two more policeman served me no more anxiety than as when my alarm goes off to wake me and to remind me to get cycling. 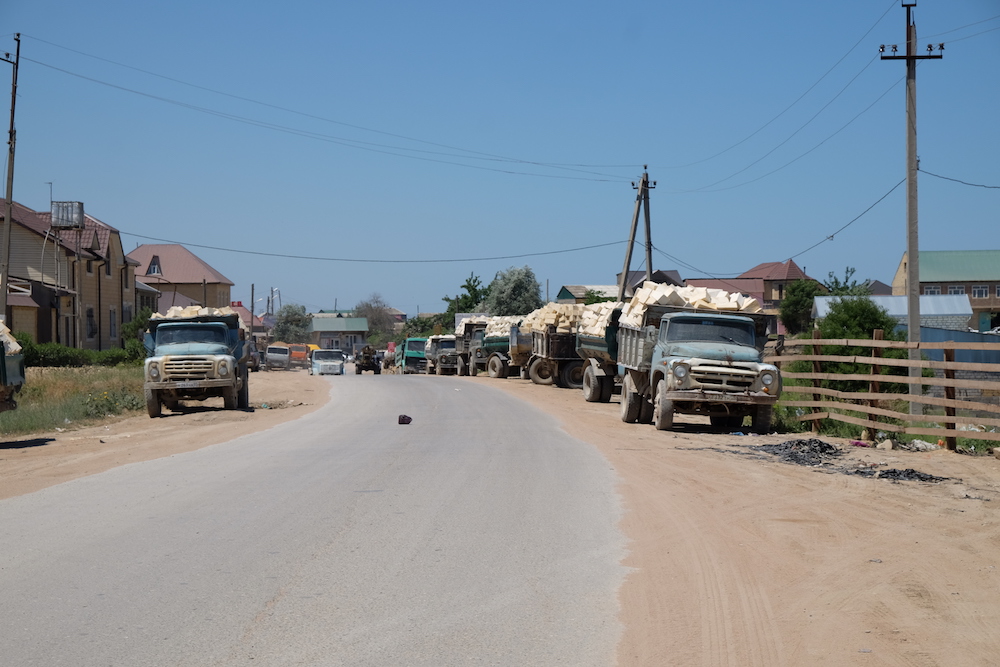 Four kilometres cycling along the sandy roads away from this hotel I reached a crossroads and stopped to check the map. A couple of men came to see if they could help, so I rapidly looked up the name of a town nearby to aid the next part of the communication. I mentioned a town about ten kilometres up the road. They tried to send me back to the main road, but that’s no fun so I shook my head and pointed along the seaside roads. They indicated that the seaside roads were sandy and bumpy: “problema niyeta”, I said confidently. They shrugged and one of the men offered to lead me in his car to the town, which sounded useful for me but slow for him. The road really was a sandy, pothole-filled challenge, as slow for a car as it was for a bicycle. We bumped along passed village houses and passed the sandy beaches of the Caspian Sea dotted with swimmers and sunbathers. I hadn’t had breakfast yet, so I was hungry and longed to stop on the beach and eat the leftover chudu in my pannier. Just a few hundreds metres after what looked like an idyllic beach for sitting and eating chudu and just when I was regretting agreeing to trail this car all the way to the next town, the car stopped. Adbul, the driver, jumped out and indicated that I was coming back to meet his family and eat food. A few women, including Adbul’s wife Louisa, tumbled out of the back of the car and I was walking down their drive before I’d had time to respond.

Adbul, his wife Louisa, and their two sons, live in a hub of activity. They had been to market that day and done the shopping for a number of people in the village, many of whom turned up, stayed to eat, drink tea and gossip. I sat in their kitchen surrounded by the activity. The kitchen had a concrete floor and white walls, a Coca Cola branded glass-fronted fridge and a large table. The table was a never ending source of food. Throughout the time I was sitting on the homemade blanket-covered bench there appeared: Uzbek bread, cheese, tomatoes, cucumbers, coriander leaves, soup, mashed garlic, kinkal (Dagestani dumplings), a whole roast chicken, sliced raw fish (Abdul is a fisherman), apricots, melon, cherries, bananas, urbech (Dagestani paste of nuts, seeds and linen bark), plus a three-tiered sandwich tray that had a constantly replenishing range of confectionary including fudge, dates and miniature chocolates. Alongside this was a never ending glass of tea, or if not tea, apricot puree, or if not apricot puree, a yoghurt drink called ayran. Accompanying this diverse and fresh range of food was the sound of birds flying in through the open door and landing on the metal bars lining the ceiling—the purpose of which seemed only as a perch for said birds. The cat prowled around the floor waiting for titbits and the dog stood alert and visible through the window, guarding the gate protectively.

Louisa spoke a little English and this was enough to get by. Adbul didn’t ask me many questions, but when he did ask me something he went to great measures to ensure that I understood, mostly using elaborate role play. He wanted to ask if my GPS could do route planning. He also has a Garmin. I did not understand this when he first said it in Russian, so he went to the middle of the kitchen, put a water bottle on the floor and said “dom” (home). I nodded. He walked away and pretended to type into the GPS. Then he acted out turned left and right, following the instructions of the GPS until he got home (to the water bottle). “Possible?” he said earnestly pointing at my GPS. I laughed and nodded, “da, eta possible”. He later wanted to ask something about fog and how sound gets muffled in the fog and how this must be interesting in England because we have lots of fog. This conversation, although very interesting, surpassed our role playing capabilities.

Whilst I was in the kitchen drinking tea and eating walnut chocolate cake—which they referred to as “Snickers”—Adbul and two of his friends fixed the right gear adjuster on my bicycle. It had been loose since Tbilisi, but I hadn’t quite worked out how I wanted to fix it. They had found an industrial aluminium glue, stuck it down and taped it up. It was now sturdy. Very sturdy. An impenetrable repair, in fact. I only hope the gear cable never needs adjusting or changing because I don’t think I will ever be able to access it again!

After eating, I started thinking about making a move. However, Louisa had other ideas and gently took the lead in the next few hours of my life. She took me upstairs, showed me the shower and gave me a towel. It seemed so embedded in the culture that a guest should be fed, washed and rested, that it didn’t seem to cross her mind that I wouldn’t take a shower. So I rolled with the culture and took a shower. Louisa then gave me a long-sleeved maxi dress—the fashion of the women in Dagestan—and washed my clothes. 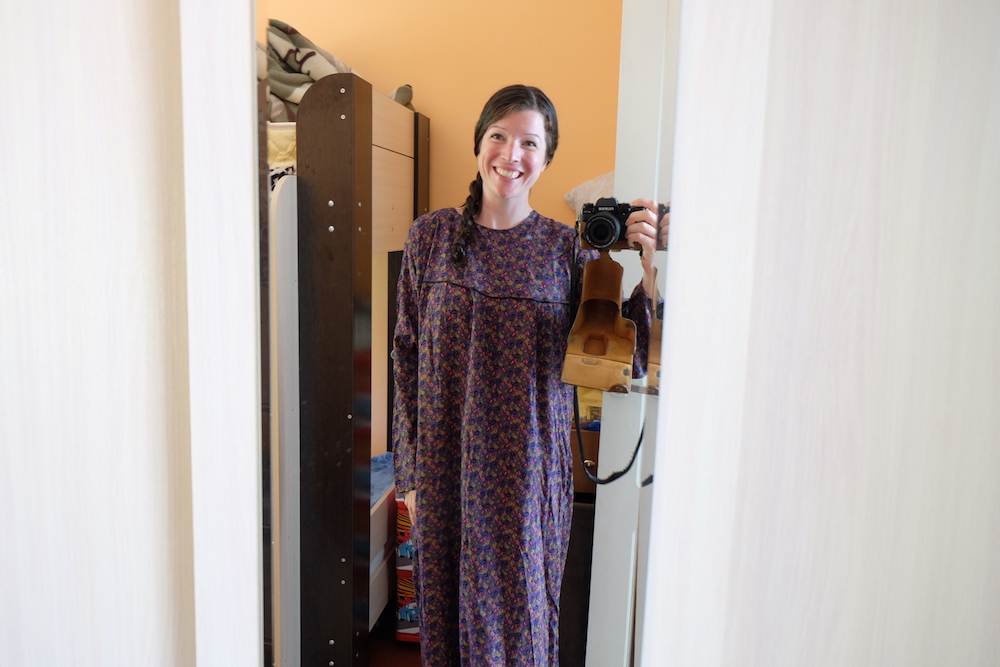 Louisa then showed me to a bed on which she had just put new sheets. She left me to sleep. I don’t need to sleep, I thought, I’ve only cycled six kilometres and it’s only 2pm. But the bed did look nice, all made up with new sheets. And perhaps it would be rude to refuse. I wouldn’t want to be culturally insensitive. I lay down, just to test the bed, of course…

I woke up two hours later. My clothes were washed and—in the wind and sunshine—had already dried. I dressed, packed my bags again and went downstairs and I thought about making a move. Louisa ushered me into the kitchen to eat again. The never ending table of food continued to bend under the weight of ever more offerings. The food from lunch was refreshed or reused into something else. Nothing was wasted. More people came and went, eating food and drinking tea. No one spoke English, but everyone was kind faced and continued to chat with each other whilst I sat, somewhat mute, consuming food peacefully. I felt sad not to be able to communicate, share stories about the UK that I’m sure would have interested them. Give back in someway. But my Russian still doesn’t even stand the test of “how are you?”.

At some point I agreed to stay the night. In the evening, another one of Abdul’s friends came round. Abdul pointed at the new company and said “Tabasaran”. He then pointed at himself and said “Dagen”. He then reminded me of the friend I had met early that afternoon who is “Lakiet”. These are three different ethnic groups in Dagestan. He gestured with his hand to everyone and said what I assume is the equivalent of “living together”. Dagestan is known for interethnic dispute. I assume this was a pointed comment from Abdul. Certainly, so far, I had not seen any evidence of the tension—but I also know from literature and news that the ethnic and religious tension does exist and that there have been some very harrowing years for Dagestan. I quietly hoped that these families would never be caught in the cross fires of this unstable region.

I sat on their little balcony reading Alexandre Dumas’ “La Boule de Neige”, a novel set in Derbent, the very town I had left that morning, just six kilometres back up the road. Louisa called me down for yet more food. Kinkal, crushed garlic and broth, accompanied by everything else mentioned above, plus another fresh platter of fruit. 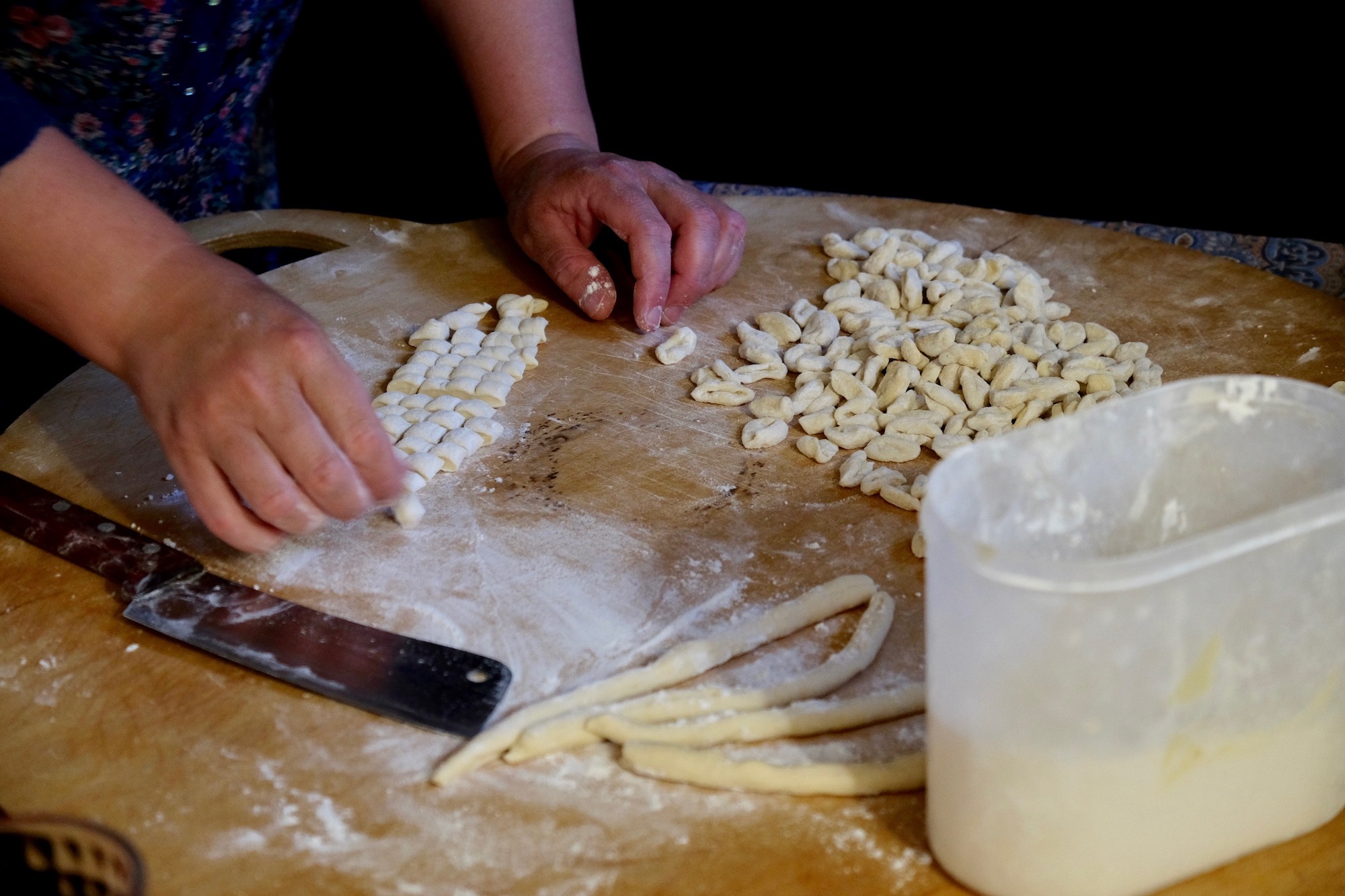 Louisa, Adbul and their youngest son sat watching television and chatting about some particular family debate. I eventually understood that their youngest son wanted to go swimming in the sea. It was Eid, the last day of Ramadan and he wanted to celebrate with friends, down at the beach. At around midnight Adbul acquiesced and drove him down. I went to bed, acutely aware that I was sleeping in Adbul and Louisa’s room and therefore forcing them onto the living room floor, but also aware that there was nothing I could do to change their mind on this unspoken norm of hospitality. I fell asleep.

Knock knock knock. I looked at my phone. 9am. I rolled over. This bed was so big and so comfy and so not a camping mattress. I tried to remember where I had put my passport. Knock knock knock. Louisa popped her head round the door: “breakfast is ready”. 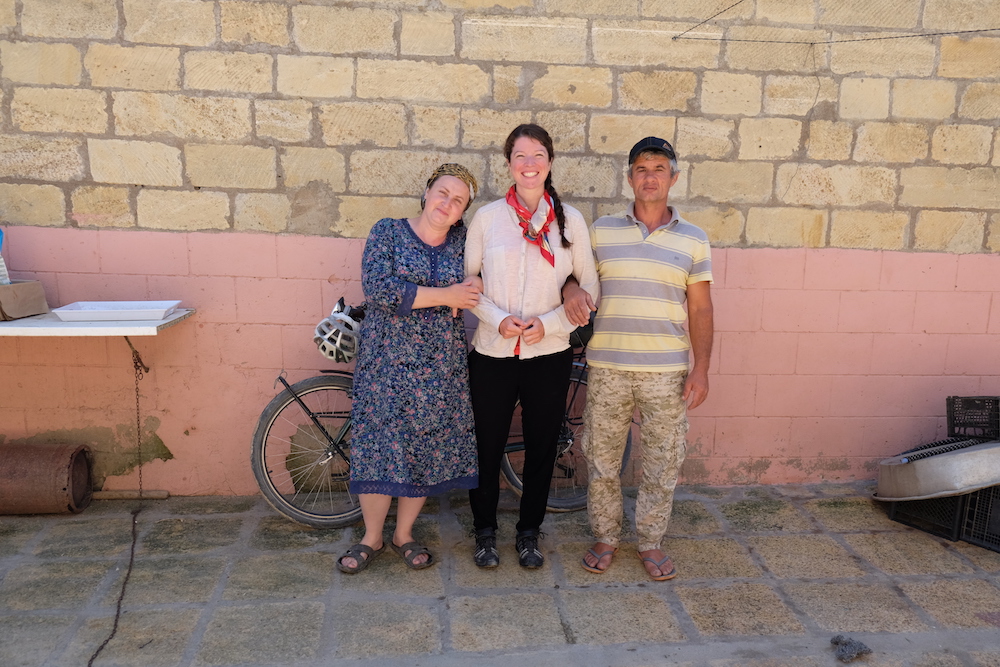